Definition: A Circuit Breaker “Opens” or disconnects an electrical circuit when certain conditions are met.

The first circuit breakers, called fuses,  were developed as a result of house fires. Actually, many current building codes were created to reduce the occurrence of fires, or to help prevent death due to fires in residential and commercial structures.

If you ever lived in an old house built prior to 1950, you may recall those 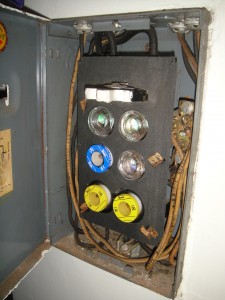 round fuses that are screwed into the fuse box like a light bulb. A fuse is nothing more than a thin element that burns away if it gets too hot. If too much electricity is demanded from a circuit the sacrificial fuse element melts and thus terminates the flow of electricity. This prevents the wires in the walls from overheating and starting a fire.

There are two main causes for the excessive draw of electricity. The most common are having too many electric appliances plugged into one circuit. Think about when a hair dryer is turned on while someone is using a microwave.

The second is a “short circuit”. This is where a hot energized wire comes into contact with a neutral or ground. This can happen when rodents chew on wires, or a poorly connected wire becomes exposed and touches a pipe or other grounded item. When this happens, there is a sudden excessive draw of electricity which exceeds the amperage rating of the fuse and causes it to burn up. The “blown” fuse would stop the flow of electricity.

One problem with fuses was that when they blew, you had to buy another one before that circuit could be used again. This was very inconvenient if the homeowner did not have a box of fuses laying around. People did many dumb things to work around this such as wrapping the blown fuse with foil or sticking a penny into the fuse socket to get the lights back on. The problem is that those workarounds defeated the protections offered by the fuse. If a short circuit existed the modified fuse offered no protection, and wire could easily overheat and cause a fire in the walls.

Cars still use fuses. Older style fuses are cylindrical glass tubes with a thin filament. Newer cars have “blade” style fuses which are colored plastic (to identify amperage rating) and work on the same principals.

Ground Fault Circuit Interruptors also known as GFCI’s (or GFI’s) were developed to prevent electrocution. These devices monitor the flow of electricity and if it detects too much electricity flowing to a ground, it immediately breaks the circuit. An example would be in a bathroom where someone might be touching a faucet while plugging in a hair dryer or other device. If there is a frayed cord or other exposure to electricity, a person can be electrocuted by having electricity flow through them to the faucet (which is grounded). A circuit breaker would probably not trip in time to save someone, but a GFCI would.

Please keep in mind that older homes are not required to have GFCI’s where they are now required. The 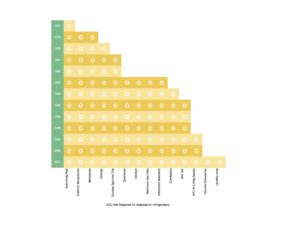 Building Code does not demand retrofitting older homes. For safety, your home inspector may recommend upgrading certain receptacles to GFCI receptacles, but a home seller is not required to do this. (Do it for your own safety). To see the location requirements for GFCI’s and the year in which they were implemented, please see our blog entry on Where and When GFCI’s Were Required.

There is a new type of circuit breaker that adds protection from another common cause of house fires. In this case, it is not over-heating, but sparking. Frayed wires or poor connections that cause arcs or sparking. Often these sparks are not great enough to cause a circuit breaker to trip. But sparks from a wire near curtains or atop insulation in the attic can be enough to ignite a fire.

AFCI’s have been required on bedroom electrical circuits since 2004. A home inspector must check for the presence of AFCI’s which are located in the electrical panel. Just like GFCI’s a home seller does not have to retrofit or upgrade the circuit breakers in their house. But you can always have a licensed electrician install AFCI’s for added safety. We highly recommend AFCI’s particularly in houses with older wiring, or where wiring modifications are a cause for concern.