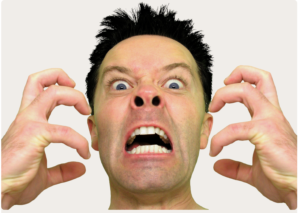 There I was laying in bed at 2:00 AM this morning listening to my smoke detector Chirp. OK, I’m guilty. I did not follow the simple routine of changing my smoke detector batteries when I changed my clocks back a few weeks ago. So I guess I deserve it.

Before I explain why the smoke detectors beep in the middle of the night, I thought I’d take this opportunity to give you a little background on these annoying, but life-saving devices.

Smoke detectors were first available for the home in the early 1960’s. Like all new technologies, these units were very expensive. They were only purchased by

commercial property owners and movie theaters. The first truly affordable, battery-operated detectors were available in 1965. In 1980 Emerson Electronics purchased the rights to the smoke detectors from Statitrol, and Sears bought the exclusive distribution rights.

Today smoke detectors are installed in about 93% of all U.S. Homes. However, it is estimated that at any give time as many as 30% of the smoke detectors are not functional as users remove the batteries when they die and forgot to replace them. As home inspectors, we often find smoke detectors that don’t work, or are missing altogether.

It has been conclusively demonstrated that Optical smoke detectors are better at detecting smoke in the early stages of a fire allowing the occupants more time to escape. Ionization type detectors are cheaper to manufacture but are more prone to false alarms. Due to the radiation, these detectors have been banned in some European countries.

We recommend the Optical smoke detectors as they provide better detection of fires in the early stages, leaving occupants more time to escape. Ionization detectors are better at detecting fires that are in the flaming stage, but that might not allow enough time to escape. The National Fire Protection Agency (NFPA) has determined that all smoke detectors should be replaced every 10 years.

And smoke alarms should be placed in the following locations: 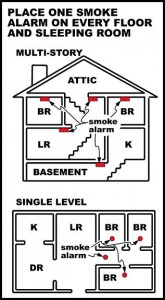 Placing smoke detectors outside of a bedroom provides for earlier detection of fires if the bedroom door is closed. However, the sound may be reduced due to the closed door, and not wake the occupant. That’s why newer installations require the alarms to be interconnected so that regardless of where the fire starts occupants will be awakened.

Back to the Midnight Chirps

Now back to my 2 AM wake-up call. That annoying “Chirp” … “Chirp” that you hope will stop but doesn’t. Why does it always happen in the middle of the night?

As we all know temperatures drop during the night. When you have a battery that is near the end of its life, it may produce just enough power during the warmth of the day to satisfy the detector. However, when the evening temperatures drop enough to slow the chemical reaction of the battery, and thus the electrical output, the detector warns that the battery is too weak to function. And that is why they almost always wake us up in the middle of the night.

Please upgrade your smoke detectors to new detectors that have a sealed, 10-year battery so you don’t have to change them for years.

About the author: Philippe Heller is president of The Real Estate Inspection Co