Superman had x-ray vision. Doctors use x-rays and MRI’s to look inside your body. The military and police use infrared to find suspects hiding in the bushes. Each application allows the user to observe things that are not visible to the naked eye and allows them to do a better job.

A few top notch home inspectors are starting to use Infrared Thermal Imaging Cameras (also know as IR cameras) for the same reasons. With this technology,

We use the latest FLIR Thermal Imaging Technology

they are able to detect some problems that are not visible to the naked eye. While it does not give the inspector super-human powers, it does give them an edge on finding anomalies in a house that might not otherwise be discovered. The Real Estate Inspection Company has been using IR cameras since 2005, and the results are fantastic. Just like smart phones, satellite TV, and MP3 players, the technology is amazingly complex. but using them is fairly simple. So how do we use this technology to do a better inspection?

Infrared Cameras “see” in the infrared spectrum, or in other words, it “sees” the heat emitted by items and converts it into an image that humans can see. Since everything has a temperature, the camera is a very effective tool to show us how items are heating or cooling. Even items in your freezer have different temperatures based on their thermal mass. An ice cube has a different thermal mass than a frozen piece of bread, and the bread will heat up more quickly than the ice cube when removed from the freezer.

Performing an IR scan of a house involves a few steps. First, we run all the plumbing in the house. Running the water in upstairs bathrooms is particularly important because shower pans and tubs are a frequent source of leaks. At the same time we will turn on the furnace. The furance will start to warm up interior surfaces of the house (obviously). But any areas that are wet will not heat up as quickly. When looked at with the IR camera, the wet areas will stand out as a cold spot when compared to the surrounding areas, unable to heat up as quickly as the dry areas due to higher thermal mass.

Evaluating the home for leaks with an IR Camera is a simple process, but one that most home inspectors do not use (The cameras are very expensive ranging from $6,000 – $12,000). And with many bank-owned homes getting a quick paint job for a fast sale, water stains may be covered up. Evidence of a leak will be overlooked by most home inspectors. But the IR camera can “see” these leaks even through a new paint job. 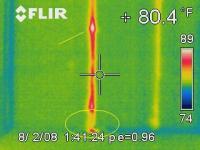 Thermal Imaging of a leaking pipe

In one example, I was inspecting a newer home that had recently been foreclosed. The house was about 7 years old and had been very recently painted by the bank. The house appeared to be a cream puff by all standards compared to most of the bank-owned homes we’ve seen. In this case I ran hot water at the sinks IR image of drain leak from a TV mount and tub in the upstairs master bathroom. After a few minutes I scanned the living room below with the IR camera. The hot drain pipes were clearly visible in the wall. After carefully looking at the image I noticed a very small pool of hot water at the base of the pipe. I looked closely at the baseboards and still saw nothing. But on very close examination, I found a small amount of water leaking under the baseboard.

We looked at the wall closely from different angles and noticed that there were six spackled holes in the same pattern as a flat panel TV mounting bracket. Sure enough it appears that the drain line was pierced with one of the mounting bolts. While the bolt was in place, no leak occurred. Now that the house was vacated, and the mount removed, a leak occurred. This is similar to a nail in your tire that does not leak until you remove it.

Fortunately I found this leak and avoided a lot of damage. This leak was in an area of the living room that with all likelihood would have been covered with furniture. The leak could have gone unnoticed for months. Besides the physical damage, extended exposure to moisture could easily lead to a mold problem. But a simple fix was all that was required to avert disaster. 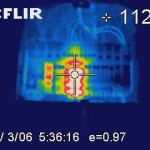 Plumbing leaks are only one defect that we search for with the IR camera. It is an effective tool to find roof leaks after a recent rain. It can also be used to find missing insulation, open or leaking ducts, and over-heated circuit breakers. So when evaluating which home inspection company to hire, try to find one that uses the latest testing equipment such as Infrared Thermal Imaging. The inspection may be a few dollars more, but it is worth it.