One of the biggest disappointments in the home buying process is getting a home inspection report with tons of stuff you didn’t expect. It is one of the main reasons that buyers back out of a purchase. Often it is not the severity of the items in the report, but the realization that an older home may be different from what you are used to.

Get the full article

Read this free article in which we focus on some issues related to buying a house built in the 1970’s. This is not meant to alarm the would be buyer. It is not an exhaustive comparison of the building codes of thirty years ago compared to today, but rather a general discussion of some of the things that you may find in an inspection report if you are buying a home from that time period. For our full article, please click the article cover at left.  If you are considering purchasing a house built in the 1970’s please know that some of these items may come up.

Houses built in the 1970’s generally have modern components, albeit aged. The heating and electrical systems include many of the health and safety components that you would expect in a modern home. Forced air heating, grounded electrical systems with circuit breakers (instead of fuses), insulation, and ABS drain lines to name a few. As with any industry, certain technologies that appeared promising turned out to be less desirable with the clarity of hindsight. The 1970’s were no exception and there are some problems associated with houses built in the 1970’s. Three items that may turn up on a home inspection report are:

During the late 1960’s and 1970’s there was a worldwide shortage of copper – the preferred material for making house wiring. The industry turned to the next best conductor – aluminum. The product was readily available, less expensive, and performed very well 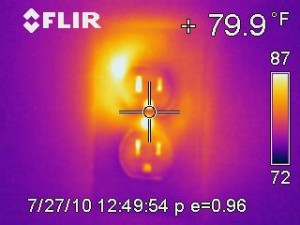 as a conductor. After a few years, however, electrical fires began to occur in homes with aluminum wiring.

Was the wire to blame? Not exactly. There is a chemical reaction that occurs when you connect two dissimilar metals together. Corrosion. When the industry switched to aluminum wires, they didn’t make any changes to the receptacles or light switches being used. Many of these had terminals that were copper or other metals that  reacted with the aluminum wire connected to them. After a few years the corrosion at these connections deteriorated the wires resulting in small gaps, or very thin sections of wire. As the wire’s capacity to carry current decreased, the result was an increase in heat or even arcing which can cause fires as shown in this thermal image.

Aluminum wiring is still allowed on 30 and 40 AMP circuit which are used for electric ovens, AC condensers, clothes dryers, etc. These circuits usually are run directly from the panel to the appliance without any connections along the way. Your home inspector should check for aluminum wiring on 15 and 20 AMP circuits. If found, the inspector should recommend that a licensed electrician evaluate the entire electrical system of the house, and make the necessary upgrades to decrease fire hazards. For more detailed information, please visit http://www.inspect-ny.com/aluminum/aluminum.htm.

Asbestos was used as a fire retardant. It performs well as an insulating material, too. So it was common practice to use asbestos on the heating system to protect the surrounding wood and insulate the ducts. It was also added to the “popcorn” ceiling texture to make it less flammable. Of course some types of asbestos were found to be a carcinogenic so it is no longer used in homes. Your inspector should recognize materials that may contain asbestos.

While you cannot confirm the presence of asbestos just by looking at it, your inspector may suggest that you have it tested by a qualified lab. Another compound that is no longer used is lead. Lead was used in virtually all house paint up until it was banned as an additive in 1978. Typically if the paint is in good condition and not peeling, you can simply paint over it and seal it. If, however, the paint is peeling or flaking, your inspector may recommend testing or at least a professional paint job to seal the paint and reduce the risk of exposure to lead.

One final thought on buying a house from the 1970’s. That was 40 years ago! Just like a car, parts in a house wear out. You should expect that some items will be worn, and your inspector may recommend repair or replacement. These can include roofing, plumbing fixtures, heating and cooling systems, window hardware, appliances, etc. So when buying an older house, take these things in stride.

Where are Smoke Alarms Required?
6 DIY Projects that Require a Permit